(Pictured above in the replica of the Irish Times office in the Little Museum of Dublin: Gordon Lewis, with film director Yewweng Ho. Photographer Paul Sherwood)

A film about Legion of Mary founder Frank Duff and his battle with Archbishop John McQuaid and Dublin City Council to keep the Regina Coeli Inns open over 50 years ago is to be produced by a former resident of one of the houses.

The film is to be directed by internationally acclaimed songwriter and music producer Gordon Lewis, who spent the first nine years of his life with his mother at the Regina Coeli hostel for single mothers in central Dublin.

He announced details of the film at an event today at the Little Museum in Dublin, which plans to hold an exhibition on the life of Frank Duff later this year.

Lewis has built a hugely successful career in the UK, working with world famous artists including Elton John, David Bowie, Queen and The Pretenders.

He is also the author of a bestseller and a film about his childhood, “The Secret Child”.

Lewis said filming of ‘The Maverick’ is due to begin in the coming weeks and will show the ‘true genius’ of Frank Duff and how he overcame opposition to keep the Regina Coeli hostels for single mothers and for men homeless people opened after being served. with closure notices in the early 1960s. 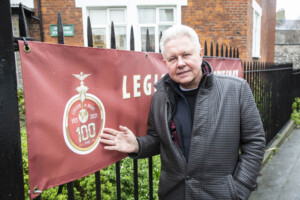 Lewis said that ideally he wanted to film the project in Dublin with the Regina Coeli hostel as the backdrop, but he couldn’t get any response from the Montfort Trust, which owns the building. He is now looking for locations in Belfast and London but intends to use Irish actors.

He also received no response from the Trust to a proposal to erect a plaque in honor of Frank Duff placed on the building of the Reginal Coeli Inn.

Frank Duff was born in 1889 and worked as a civil servant until his retirement to concentrate on his work with the Legion of Mary and the Inns.

Last year marked the centenary of the Legion of Mary which began as a small lay Catholic organization in Dublin but now has ten million members worldwide.

Lewis’ mother, Cathleen, was from Cork and moved to Regina Coeli in the 1950s after becoming pregnant. She and her son moved to London when he was nine.

“I had no idea what my mother went through before arriving in Dublin.

I was a secret to his family and to everyone in the outside world.

“No one outside the inn even knew I existed.”

Lewis said that as a young boy he got into mischief on the streets of Dublin.

“It was then that my mother realized she was going to have to do something to save me from the bleak future facing so many illegitimate children in Ireland at that time.

“That’s what motivated her to move to London where she got married.”

He said Frank Duff was a frequent visitor to the inn as a child, always riding a bicycle.

He remembers being friendly with everyone.

“I have never forgotten his kindness and I strongly believe that Frank’s contribution to the lives of single mothers should be remembered,” Lewis said.

“My initial idea was to have a plaque placed on the Regina Coeli Building to recognize the kindness and bravery of Frank Duff and to commemorate the thousands of single mothers and their children who lived together in this building through Duff’s foresight.

“I contacted the owners of the building, the De Montfort Trust, which is part of the Legion of Mary, to give permission.

“It is very disappointing that I never received a response from them to my request.

“Frank Duff was indeed a maverick, but he was a rebel with a cause.

“He was also a devout Catholic who went to Mass at least once a day – and he saw no contradiction between his Catholicism and his charitable work with the oppressed.

“Regina Coeli was not run like other church homes for single mothers such as Laundries de la Madeleine, where babies were put up for adoption when they were born.

“Frank passionately believed that a child’s place was with its mother, and that was how the Inn operated.

“All the women who lived there looked after their children, but they had to work to pay for their upkeep.

“Those who couldn’t work were paid to take care of the children during the day.”

The film will deal with how Duff fought to save the Inns and prevent their demolition. “He was motivated by the fact that mothers and children would have nowhere to go except on the streets.”

A third book will be launched this month. www.secretchild.com

Previous The council will continue to provide improved housing in the borough
Next I went from claiming benefits and payday loans to making $1.4 million a year in sales on a side hustle