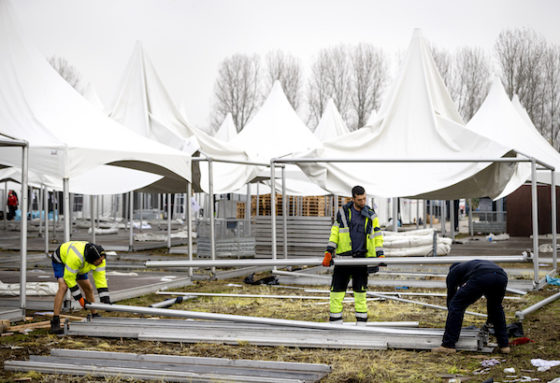 Afghan evacuees who stayed in emergency accommodation after arriving in the Netherlands in August and September are increasingly desperate at the lack of perspective, broadcaster NOS reports.

Some 2,000 Afghans who have helped Dutch police forces and NGOs in one way or another have been expelled from Kabul following the Taliban takeover.

Weeks later, the lack of privacy and uncertainty about the future lead some to despair.

Representatives of the United Nations refugee agency who visited the Heumensoord, Harskamp, ​​Zeist and Zoutkamp centers in September and October, expressed concern about the circumstances facing the refugees, particularly in Heumensoord where people live in tents.

Earlier, the National Ombudsman and the Dutch Human Rights Committee wrote to Deputy Justice Minister Ankie Broekers-Knol telling him that the tents were “totally unsuitable” for the winter.

Waisuddin Akhondzada, one of the first evacuees to arrive in the Netherlands, and currently living at the Heumensoord shelter, said “sleep is impossible”. “Everyone is used to taking a sleeping pill at night now,” he told the broadcaster. “Children don’t sleep either and fall asleep in class. There have been complaints about it from teachers, but now they know why it is happening, ”he said.

Akhondzada, who worked for the Dutch police mission in Afghanistan, said he was grateful to be in the Netherlands, but the lack of perspective overwhelmed him and many others.

Sayed Ahmad Sadat, who came to the Netherlands last month and lives in Harskamp, ​​expressed concern over the accommodation‘s planned closure on December 1.

Sadat said the circumstances in other places could be worse, such as Leeuwarden, where families and young men sleep in a room with no privacy. “One family said they would not go to Leeuwarden under any circumstances. They fear for the safety of their mothers and daughters, ”he said.

Like Akhondzada, Sadat said he wanted “to learn the language so that I can contribute to society”. But that’s not possible now, ”he told the broadcaster.

A spokesperson for the COA refugee settlement agency said the organization is aware of the sometimes heartbreaking experiences of refugees in some of the places, but said the issue is too complex to resolve quickly.

The lack of housing combined with a large influx of refugees and the number of ministries and organizations involved make things very difficult. “It would be easy if there was a party to blame but there isn’t,” she said.

The agency has very little choice when it comes to emergency locations such as Leeuwarden. “We want to provide people with at least a bed, security and medical assistance. In Leeuwarden it must have been a hall and we know that is not ideal. It’s not like we like to house people in marquees. But we can only offer what we have.

Acting Home Affairs Minister Kasja Ollongren and Deputy Justice Minister Ankie Broekers-Knol said last week that “the quality and quantity” of emergency housing would remain “worrisome” until the end of the year at least.

Thank you for donating to DutchNews.nl

The DutchNews.nl team would like to thank all the generous readers who have donated in recent weeks. Your financial support has helped us expand our coverage of the coronavirus crisis evenings and weekends and keep you up to date with the latest developments.

DutchNews.nl has been free for 14 years, but without the financial support of our readers we would not be able to provide you with fair and accurate information and functionality on everything Dutch. Your contributions make this possible.

If you haven’t made a donation yet, but want to do so, you can do this via Ideal, credit card or Paypal.

Previous YHA New Zealand closes all hostels after 90 years
Next Changes to MIQ: What you need to know before booking a trip abroad